The week was finally upon us. Teams started arriving on Monday even though the track was closed till Wednesday. By Thursday, almost all the teams had put in a number of laps.

On Thursday, the second day of practice, we saw a glimpse of the expected race pace. Free practice on Friday did not throw-up any surprises bar Archie of Inferno racing absolutely shredding on his ZX6R. Were we going to see him challenge Lolu and Ime Peters for P3 come Saturday.

Thirteen riders had participated in the three qualifying sessions over the year with only the ten fastest riders lining up for the race on Saturday.

Onto race day, there was a reshuffle on the starting grid with Badblood who qualified in P3, Dot in P7, Queen in P9 and Akua in P10 all absent due to different reasons. At the time of writing, we do not know why Queen and Akua could not make it. Dot had issued a statement a few days to race day that she will be unavoidably absent. The number of laps was also reviewed downwards to 12 laps from the speculated 16 laps.

Once the green lights went out albeit not literally, Ahmed and Blow got off the line superbly immediately putting a few bike lengths between the rest of the field. Lolu on the other hand, struggled to keep the front wheel down which cost her a bit of drive. Fortunately, none of the riders behind her took advantage. Into Turn 1 and there was no surprise who took the hole shot. By turn 4, Ahmed had put a few bike lengths between him and Blow. A three way battle between Lolu, Ime and Flygirl seemed to be coming to life. Ime was bringing Flygirl with him as he started stalking Lolu throughout the opening lap. Archie who seemed to threaten for a podium place with the pace shown on the last day of practice was further behind with Kominati in P7.

The Start-Finish straight and to a larger extent, the first sector of the track T1 through T4 saw some really exciting battles. Starting the third lap approaching turn 1, Ime and Lolu were side by side but Lolu just held him off to take P3 back from him. While that was happening, it brought Flygirl closer to both of them. Flygirl started to sense that P3 might be a possibility and she started pushing to close the gap between herself, Ime and Lolu further. Unsurprisingly, Ime attacked Lolu on the Start-Finish straight on lap 4 but again Lolu emerged the winner going into turn one with a sweeping line compared to the narrower line Ime was trying to use. It cost him drive through turn 2 and turn 3. Again, he chose the inside line while Flygirl swept around him to take P4. Flygirl could smell blood and was starting to believe that P3 was within her grasp. Further back, Archie rolled out of the race.

Start of the fifth lap saw Ime drop the bike down the road at turn one while chasing Lolu and Flygirl. Not quite sure if he missed his brake marker but he started tipping in the bike very late. Two turns later, Flygirl went past on Lolu and the drive she got out of turn 4 was amazing that she had already put some distance between them. Just like that, Flygirl who qualified in P6 was on the last podium place. She broke Lolu’s challenge and rode to a comfortable P3 with Lolu settling for P4. Ime came in P5 and Kominati in P6.

All year it never looked like Ahmed’s crown was under any threat. With Badblood out, Blow finishing second was not in any threat either, not to most observers anyway. As a result, there was really nothing exciting to watch. Not taking anything away from both their performances, Ahmed was nothing but consistent with his lap times which is no mean feat especially as he was riding against himself. Flygirl taking the last podium place away from the favorites, Lolu and Ime was simply breathtaking. This was without a doubt the best rider today especially when her qualifying runs are used as a reference. It looks like a very brilliant team strategy not to show anyone their hands during the entire practice session this week. To think we were almost deprived of the cajones on show  in the race because they could not get her bike to start in pit lane during the sighting lap. 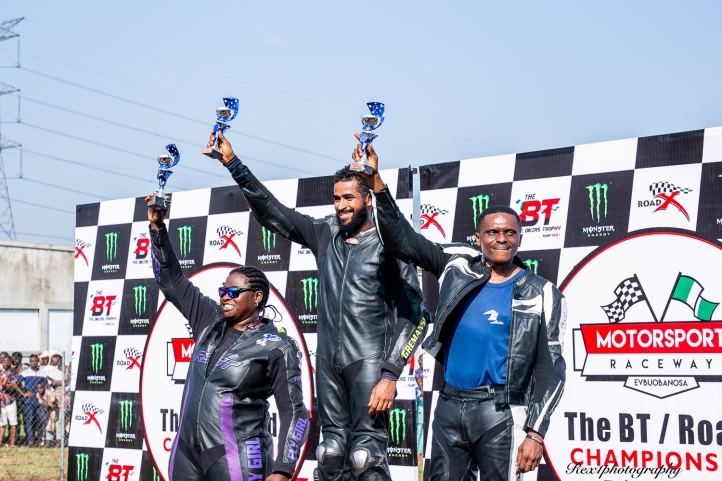 Only Archie of Inferno racing did not finish the race.

The line up only had 2 riders from last year in Ahmed and Blow while the remaining 5 were all rookies. While the sophomores had a very straightforward race, the excitement came from the unexpected three way battle for third with Flygirl coming out on top much to the surprise of everyone but her team.

She deservedly picked up the Rookie of the year at the Awards dinner later that night.

It was a race of two teams eventually, 24-7 racing and CC racing.